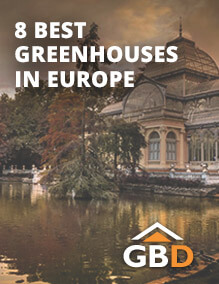 Europe has a long, rich history with many beautiful wonders found throughout the continent. From medieval castles to small villages with beautiful architecture, Europe has much to offer to both natives and tourists alike. If you ever find yourself in Europe, it’s highly recommended that you visit one of its numerous historic greenhouses. Greenhouses are structures that are built to specifically cultivate plant life, and many of them are amazing works of art. The 19th century brought with it a new type of construction technique that utilized glass and metal. This enabled greenhouses to come into existence. Read on to learn about 8 of the best greenhouses in Europe.

“Belgian royal greenhouse” by manfredasclerk is licensed under CC BY 2.0

During 1873, an architect named Alphonse Balat began an ambitious project for King Leopold II. This project involved building a series of greenhouses that skirted the Castle of Laeken. The end result was a sprawling complex with the appearance of a glass city. Throw in the naturally beautiful landscape of the countryside, and the Royal Greenhouses is quite the sight to behold. The entire complex is covered in glass cupolas, massive pavilions, and wide arcades. The complex is a testament to what could be done with the innovative building materials of glass and metal and is an excellent place to visit if you ever find yourself in Belgium.

Madrid can owe a portion of its popularity to El Retiro Park. Part of the city’s heritage, El Retiro Park has been around for centuries. It was once utilized as an area for recreational relaxation for the royal family. As a result, it has become a centralized location that has boosted the city’s image. The first time that El Retiro was ever mentioned was during the era of the Catholic Kings. During the reign of Felipe II, the Palace of Cristal was used as an escape to get away from court life for a time. It was also used as a religious retreat and a place for quiet reflection.

Kew’s Palm House isn’t just any ordinary greenhouse. It’s considered to be one of the most significant Victorian era greenhouses in the world. The Palm House at Kew Gardens has an iron and glass design that was specifically suited for the exotic plants that were brought over to Europe during the early Victorian era. The significance of this greenhouse is derived from its revolutionary design. It was the first of its era to use wrought iron to stretch across such a wide area without the use of support columns. The idea was taken from the shipbuilding industry during that time. In fact, if you were to view this structure from a distance the greenhouse has the appearance of an upturned hull. Ultimately, the Palm House at Kew Gardens provided a massive, lofty area that could house large palms as well as other plants.

Over time the Royal Botanic Garden has become world-renowned. It was first founded in the 17th century as a single physic garden. Today, it has expanded to cover four gardens and houses a variety of exotic plant life. To top things off, the Royal Botanic Garden is a world-renowned focal point for education and plant science – not to mention all the beautiful fountains and greenery in the grounds.

If you’re looking to get away from the city for a bit, you should take a trip to the Botanical Garden and Museum in Berlin. There’s a sharp contrast to the fast lifestyle of the city vs. the serenity and beauty at this beautiful greenhouse. Some people claim that time slows down the moment you step through the front door. Once you’ve had your fill of the garden, you can enjoy the wonders of the botanical museum. You’ll be able to enjoy astonishing exhibits before heading back into the hustle and bustle of the city.

“Palm House” by Chris Eason is licensed under CC BY 2.0

The Palm House is known for its assortments of exotic plants. You’ll find hanging baskets, tropical plants, birds of paradise, and various seasonal displays. The Palm House is unique in that it is one of the earliest examples of a greenhouse made from curved glass and iron. It demonstrated the ingenuity of architects as they handled glass and metal more and more during the Victorian era. The design of the Palm House was taken up by Sir Charles Lanyon, who also had a hand in designing Queen’s University. In 1839 the stone foundation was laid by Richard Turner, a well-respected ironmaster. The dome of the building was finally added in 1852.

“at the botanical gardens” by Paul Joseph is licensed under CC BY 2.0

The Botanical Garden is an extension of the Natural History Museum of Denmark at the University of Copenhagen. The garden and subsequently the greenhouse that surrounds it holds the largest known collection of living plants. It also accommodates a wide variety of plants that include three gene banks. The Botanical Garden possesses several distinguished affiliations. These include a connection to the largest Danish herbaria collections (that involve plants and fungi) as well as an affiliation with the central library for botanical literature in Denmark – BotaniskCentralbibliotek.

The Kaisaniemi Botanic Garden is an outdoor wonderland that covers approximately four hectares. It’s advised that if you visit this scenic garden, you should do so in the summertime. This is when all of the flowers and various plants are in full bloom. The central garden is a focal point of beauty where all of the exotic plants converge around a small pond. All around the premises greenhouses ensure that this garden thrives all year long. A total of ten greenhouses, open to the public, allow visitors to view exotic plants from tropical wetlands, humid rainforests, tropical wetlands, and more. This location is also where you can find the world’s biggest seed. The Kaisaniemi Botanic Garden is certainly a location for those curious about the various types of plant life around the world.

Whilst people might think of Scandanavia and log cabins as being typically European, there’s so much more out there. Europe is a wonderland of luxury greenhouses that house some of the most exotic plant life on the planet. Full of history, these greenhouses are a testament to the ingenuity of the times that they were built and continue to beautify the landscapes of Europe.